The New York Times: 10 New Books We Recommend This Week 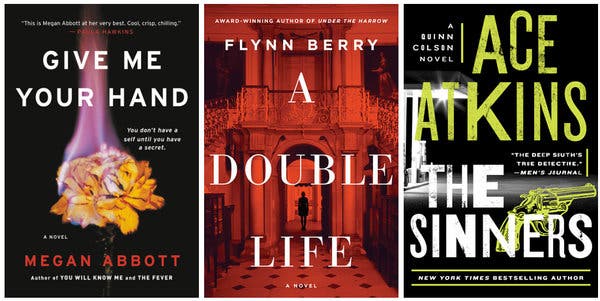 It’s almost August, which for some of us means there’s only one more month to look awkward in flip-flops and a thick smear of sunblock while we lie on a hammock or a sandy towel, sweaty and heat-dazed and content, with an open box of ginger snaps and a pile of books at our side. Thrillers, probably. This week we recommend a bunch of good ones — from the latest Megan Abbott novel (“Give Me Your Hand,” about rival scientists with a long history) to a new take on Raymond Chandler and his classic detective Philip Marlowe (“Only to Sleep,” by Lawrence Osborne) to Flynn Berry’s tale of a daughter seeking answers and vengeance after a murder close to home (“A Double Life”).

And because midsummer nights’ screams needn’t be limited to fiction, we’ve thrown in the true-life story of Arthur Conan Doyle’s involvement in a turn-of-the-century murder case (as written by the former Times reporter Margalit Fox), along with Allie Rowbottom’s surprisingly dark family memoir of life as a Jell-O descendant. Bonus for Megan Abbott fans, just to bring things full circle: As Abbott did in her 2014 book “The Fever,” Rowbottom also offers a take on the mysterious twitching girls of Le Roy, N.Y. You might pair those books, like white wine and fish (or vodka and Jell-O), and ease out of summer that way, uneasily.

...
By clicking "Accept All", you agree to the storing of cookies on your device to enhance site navigation, analyze site usage, and assist in our marketing efforts. Find out more.