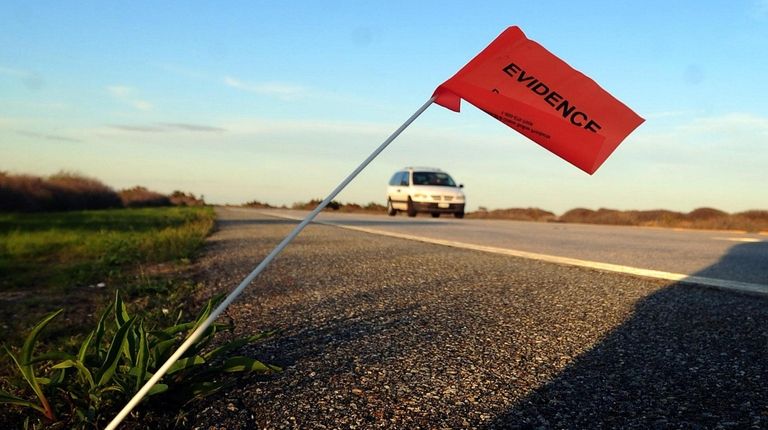 An evidence marker can be seen along Ocean Parkway near Gilgo Beach on May 9, 2011. In 2006, a Suffolk County police officer and his K-9 partner discovered human remains in the wooded area along the parkway between Oak Beach and Gilgo Beach. Photo Credit: Newsday/Thomas A. Ferrara

In Cristina Alger’s brisk thriller “Girls Like Us,” Nell Flynn, a 28-year-old on medical leave from FBI duties in Washington, D.C., returns home for the first time in 10 years to Suffolk County. In a tale both disturbing and poignant, she takes on a case that stirs unsettled moments from her past.

Her narrative begins on a fishing boat off the coast of Orient Point on a clear day in late September. Nell and officers from the Suffolk County Police Department (SCPD) gather to cast her father’s ashes onto the water. A 52-year-old homicide detective, he had been killed a few days before at 2 a.m. when a motorcycle he was riding skidded off a wet road on Montauk Highway.

Memories of her parents’ turbulent marriage haunt Nell as she later revisits her family home in Hampton Bays: “At night, when they thought I was sleeping, I would creep out of my bed and sit at the top of the stairs and listen to them argue. … [Their love] was as messy and imperfect as the house my mother kept. It was an uneasy marriage, but a passionate one.”

Her parents’ union, alas, was doomed. When Nell was 7, and while she and her father were on an overnight camping trip at Sears Bellows County Park, Nell’s mother was murdered. Although a 17-year-old boy from down the block confessed to stabbing the mother eight times, Nell has long harbored doubts about his guilt. She knows her father drank heavily and had a violent temper. Had he been her mother’s killer?

The morning after the informal service for her father, Lee Davis, a SCPD homicide detective, enjoins Nell to work with him on a case. The body of a young Latina woman, dismembered and covered in burlap, has been found in the dunes at Shinnecock County Park. Nell is struck: a year ago, her father had been working on a case involving another dismembered 17-year-old Latina, this one discovered in the Suffolk County’s Pine Barrens.

(This fictional case may have been suggested by the actual, unsolved murders in 2010 and 2011 of 10 young females whose dismembered remains were found north of Ocean Parkway on Gilgo Beach.)

Teamed up with Davis, Nell uncovers evidence that heightens suspicions about her father. In his desk, she finds a photograph of two young, dark, beautiful women who may have been the victims. A police officer points out that cairns mark both of the victims’ graves. “’[The killer] is someone who camps and hikes regularly,’” the officer says. “Someone like Dad,” Nell thinks. “Someone who grew up camping in state parks in Suffolk County, who continued to camp in them until very recently.”

As she works the case, Nell observes changes in the county she knew as a child. She laments the loss of “once beautiful places with lakes and forests teeming with wildlife,” now replaced by “strip malls and gas stations and dusty commercial centers.”

Nell sees how this environment affects the lives of the victims and their survivors in her case. When she tries to console the sister of the more recent victim, the embittered woman snaps at her. “None of you people care,” she says. “What do you think would have happened if my sister was a white girl from Southampton? I tell you what, the whole [expletive] National Guard would have turned out to look for her.” Nell later looks at a map she’s drawn of the case and sees it as “a spider’s web connecting Suffolk County’s richest residents to its poorest.”

Nell’s work on the case is smart and efficient, which gives the book a crisp tone and pace. Her final discoveries startle her and the reader. Matters resolved and questions answered, Nell suggests she may stay around home even after what’s taken place. “I like Suffolk County in the off season,’” she says. Readers will hope to savor more of her gimlet-eyed takes in any season.