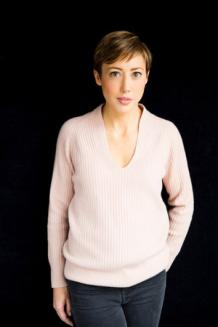 Last summer, I read THE BANKER’S WIFE by Cristina Alger and quickly picked it as a Bets On, noting that she was an author I needed to keep an eye on. So I was quick to snag a copy of GIRLS LIKE US when it came into the office. The book is set in Suffolk County, New York, but the places we know and think of in the Hamptons are not the ones depicted here. Instead, we are on the other side of the tracks where life is a lot grittier than glittery.

Nell Flynn is an FBI agent who has come home for the funeral of her father, Martin, who was killed in a motorcycle accident. She and her dad had not been close, and her mom had been brutally murdered when she was a child. Thus Suffolk County does not hold fond memories for Nell. Her dad was a homicide detective, so they share law enforcement as a bond. While she is home, her father’s partner asks her to help with an investigation into two young women who had been murdered. Nell is unraveling clues very quickly as an outsider when she realizes that signs of who the killer may be are pointing towards an unlikely suspect: her dad.

Nell immerses herself in the investigation with much trepidation. She learns a lot about her dad and what really has been going on behind the scenes in law enforcement.

I saw Cristina at an event last week. She mentioned that the book was inspired by the murders of young women on Long Island known as the Gilgo Beach murders. The victims had been killed in remote areas in Gilgo and Oak Beach in Suffolk County. All of the women had been thought to be associated with prostitution. While this is not their story, that was her point of reference.

The tone here is more police procedural than her previous work, but once again it was a quick Cristina Alger read for me. I am looking forward to seeing what she writes next.